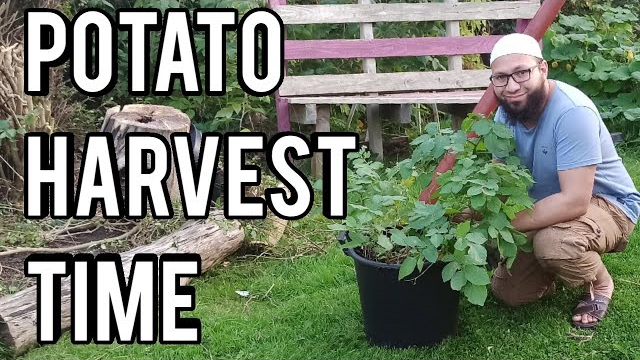 Knowing when to harvest homegrown potatoes and how to handle them after harvest helps gardeners end up with the maximum amount of potatoes possible to store for those cold winter months. Potatoes are definitely one of America’s favorite vegetables. Did you know that each year we eat about 125 pounds of potatoes per person? Potatoes are a staple food and many home gardeners plant potatoes to store them for the fall and winter months. Knowing how to take care of your homegrown potatoes is important so that they store well.

Toughen up potatoes for storage before harvest by not watering them much after they flower. Let the potato plants and the weather tell you when to harvest them. Wait until the tops of the vines have completely died before you begin harvesting. When the vines are dead, it is a sure sign the potatoes have finished growing and are ready to be harvested.

Potatoes are tubers, and you want your plant to store as much of that flavorful starch as possible.

Dig up a test hill to see how mature the potatoes are. The skins of mature potatoes are thick and firmly attached to the flesh. If the skins are thin and rub off easily, your potatoes are still too new and should be left in the ground for a few more days. Don’t leave the potatoes that you have dug in the sun for long after they have been dug up from your garden, otherwise your potatoes may turn green, Green potatoes have a bitter taste and if enough is eaten can cause vomiting and diarrhea. Small spots can be trimmed off, but if there is significant greening, throw the potato out. Potatoes can tolerate light frost, but when the first hard frost is expected, it’s time to get out the shovels and start digging potatoes. An interesting place you might not be aware of is the potato museum in Washington, D.C. that contains lots of history, information and artifacts relating to potatoes including antique harvesting tools. As you dig, be careful not to scrape, bruise or cut the potatoes. Damaged potatoes will rot during storage and should be used as soon as possible. After harvesting, potatoes must be cured. Let them sit in temperatures of 45 to 60 degrees Fahrenheit for about two weeks. This will give the skins time to harden and minor injuries to seal. After the potatoes have been dug, brush the soil off. Do not wash potatoes until you’re ready to use them. Washing can easily reduce the storage life and encourage mold. Store potatoes in a cool, dark area after harvesting. Too much light will turn them green.

See also:  How Do You Calculate Potato Salad Per Person?

Sometimes before harvesting some potatoes become exposed to the sun because they are just barely underground and not covered with soil. Keep soil over the potatoes to prevent sunlight from turning them green. If you want new potatoes, which are small, immature potatoes about 1 to 2 inches in size, harvest them just before their vines die.

How do you know when to harvest new potatoes?

Can you harvest potatoes from around the edges?

How to Harvest Potatoes – 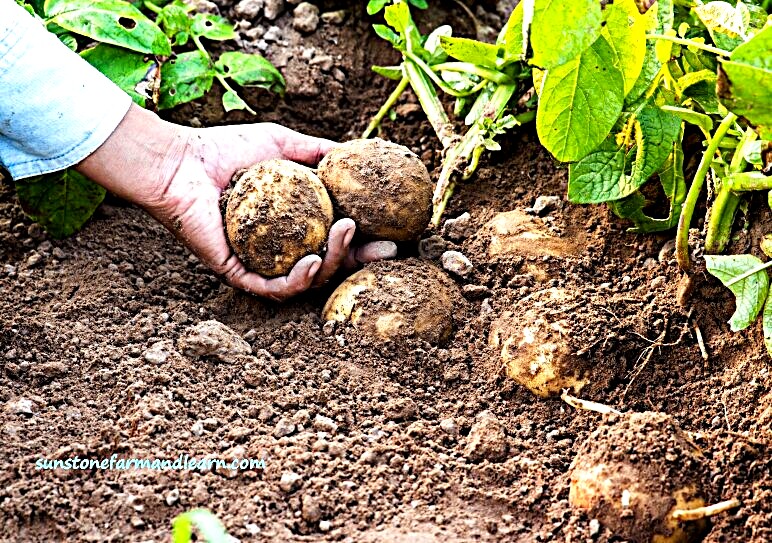 Again, it’s important to pay attention to the type of potato you’re planting and make sure you live in the right climate for it. Ideally, potatoes should mature at a point in the year when the temperature is mild, say, warmer than 40 degrees but less than 80.

Each plant will produce numerous new potatoes and three to six large ones. When the green leaves and stems start to die back, stop watering your potatoes. If you live in a wet climate, you can also cut off the tops of the plants with pruning shears to help prevent rot.

About two weeks later, lightly water to soften the dirt and begin the harvest. Carefully dig around in the ground using a gardening spade, pushing the tines into the soil just on the outside of the growth and slowly lift up the dirt under and around the potatoes to avoid damaging them. Potatoes are less likely to bruise when the soil is between 50 and 65 degrees and more likely to bruise when it’s below 45 degrees.

After harvesting, curing the potatoes can harden the skin and help them last a little longer. To do this, lay them in a dark place where the temperature is between 50 and 60 degrees for two weeks. Then, store the potatoes in cool, dry place so that they don’t turn green.

When to harvest potatoes for winter storage?

When to Harvest Potatoes – For winter storage, it’s best to let the plant and the weather tell you when to harvest potatoes. Wait until the tops of the vines have died before you begin harvesting. Potatoes are tubers and you want your plant to store as much of that flavorful starch as possible.

Temperatures of both the air and soil should also factor into when to dig. Potatoes can tolerate a light frost, but when the first hard frost is expected, it’s time to get out the shovels. In areas where the fall is cool, without frost, soil temperature will dictate when to pick potatoes. Your soil needs to be above 45 F.

See also:  What Is A Good Substitute For Potato Starch?

(7 C.) When to dig potatoes for dinner is much easier. Wait until late in the season and take only what you need, carefully resetting the plant so the smaller tubers have a chance to mature.

Is it normal for potatoes to wilt before harvest?

Plant foliage is the best indicator of when potatoes are ready for harvest – When the days to maturity have passed, you will notice the potato plant’s foliage starting to yellow, wilt and die back. If this is happening during the expected time for harvest, it’s normal, and it’s not a sign of blight, wilt or other diseases.

Early potato plants will start wilting as soon as July, while maincrop potatoes may take as late as September or October. With early potatoes, harvesting is pretty straightforward, as you don’t need to cure or harvest them at a specific time. With maincrop potatoes, you need to be a little more intentional.

The best time to harvest maincrop potatoes is when the foliage has died back, and their skins have toughened. The best way to check this is to lift one plant and feel a tuber’s skin. If the skin still feels thin and translucent, it’s best to leave them in a little longer and check back within a week or so.

Don’t leave potatoes in the ground for too long, though. When the plant has completely died back, the potatoes underground are at the risk of rotting, so harvest them as soon as possible because they won’t continue to cure underground. Don’t wash the tubers. Spread them on a dry surface, sheltered from rain and allow them to cure for at least 7 days.

You can do this in a garage or a cellar before storing them in bags or boxes.